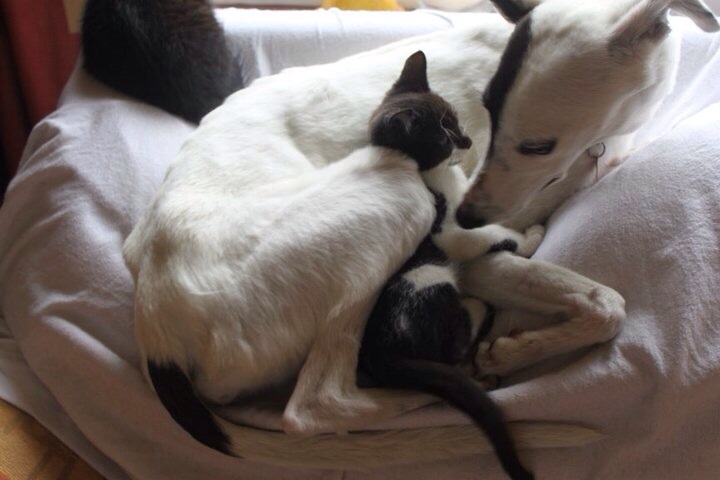 Polly was amongst a litter surrendered to DAWG in October 2010, all were starved, sick and almost hairless from mange. Unfortunately Polly failed to thrive, she developed pneumonia but this little girl was a fighter and would not give up. She was initially fostered by Claudia Cashman and I offered to temporarily foster her after Christmas, but before the day was out I knew I couldn’t let this little girl go. Polly attended a specialist who gave the dreaded verdict that Polly would more than likely not see her first birthday.

I was determined from then on that no matter how short her life was, it was going to be the best life she could have. DAWG were fantastic, put her on their sponsor program and continued to fund her extensive medication. Polly was the happiest dog in the house, loved her walks in the park, loved meeting people,and everyone who met her fell for her, so much so that I still meet people who enquire after her.

She was also one of the naughtiest dogs, a typical counter surfing lurcher who discovered that her long narrow nose was an expert tool for opening the fridge, which she did on a regular basis, but one look at her beautiful soft brown eyes and I couldn’t stay cross with her for long.

Polly, against all the odds, made it past her first birthday, saw her second Christmas, but it was becoming obvious that she was starting to fail. My little girl made it all the way to April, I was starting to hope she would make to her second summer, unfortunately it wasn’t to be. The day came when she just couldn’t go on and that painful decision had to be made. Polly left for the Rainbow Bridge on 23 April, surrounded by love, she took with her a piece of my heart and a piece of the heart of everyone who knew her.