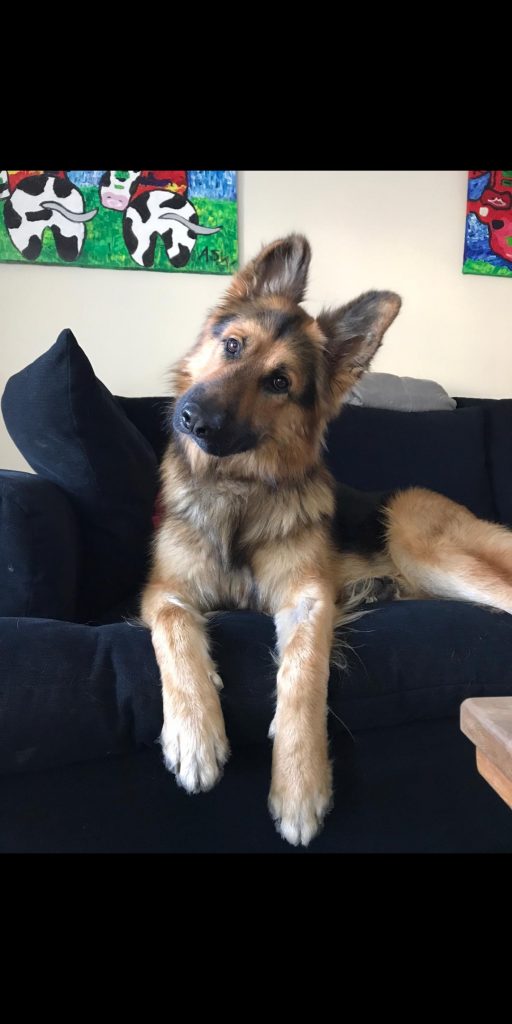 Tyson is a charming two and a half year old German Shepherd who needs a forever home with a large garden in the countryside. It’ll be a plus if there are other dog friends, who will be able to play with him all day. Tyson is a very smart and loving good boy. He sleeps with a pillow between his paws and enjoys being tucked into bed. He’ll want to eat breakfast with you in the morning and cuddle up with you to watch TV in the evenings. He loves a good routine, with naps, play time, training time and a minimum of two walks a day. His favourite games are those that are more challenging, such as hide and seek or trying to find his hidden ball. He’s a very smart boy, who knows a lot of tricks, he’s house trained, loves being groomed, good at listening, and will let you know what he needs. His new human would need to be up for teaching him new skills as he loves to learn. He is the most loyal companion, who wants nothing more than to spend quality time in his forever home. His past does come back to haunt him and he has some anxiety: he has separation anxiety and doesn’t like to be alone and has other forms of anxiety which are mostly present when outside the home. He is not too keen on men or young children, and will look to protect those who he is most loyal to. He hasn’t shown any signs of being vicious but requires some obedience training as he can be vocal.
His current fosterers will be happy to meet you with you and his potential animal friends prior to adoption. They also have a training plan in place. He also requires a special diet as he can have digestion problems.

Tyson has gone to his forever home!