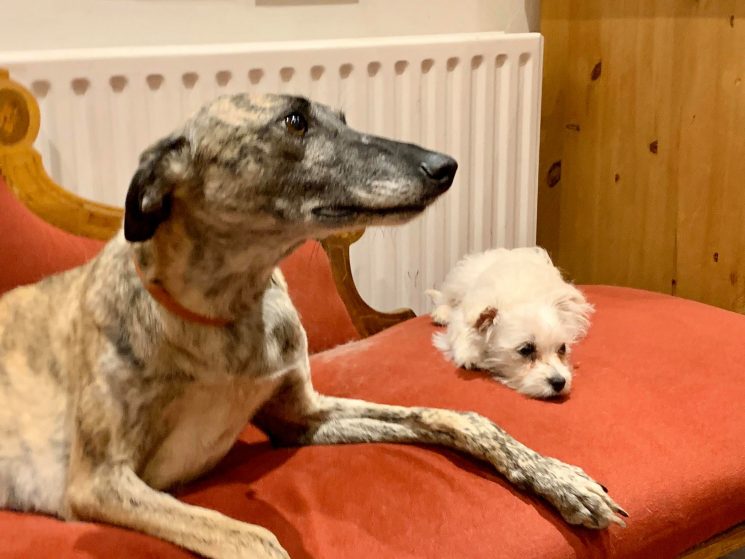 Evie is a very sweet brindle lurcher aged approximately 16 months old, who was found collapsed in a garden on New Year’s Eve, so emaciated it was a miracle that she was still alive. Evie has made tremendous progress in the last three months, she loves her home comforts and to snuggle up on the couch, but is also content to relax on her dog bed. Where Evie’s traumatic past is still evident is when she is out walking; she remains very nervous of people and tries her best to get herself out of their way. For this reason a country home, or one in a not so built up area might suit Evie best, though simply crossing the road also works very well. Evie is more nervous of men in general but adores her ‘foster Dad’ so can definitely build a relationship with the right guy! Evie is good with children but perhaps over eight years old as younger children can be a little boisterous. Evie has a wonderfully affectionate nature and whilst is nervous of the road, she does like to go for walks because she gets very excited when her lead is produced; she does a little dance and starts talking!! Evie gets on well with her foster sibling (also a lurcher) and the other dogs she has played with to date (Yorkie, Spaniel and Collie). I think that a home with another dog or flying solo would both work for Evie. 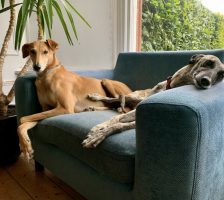 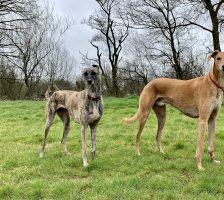 Evie has gone to her forever home!