Home / Tail Wags / Parallel the band donate the proceeds of the sale of their CD to Cork DAWG
September 13, 2013 by Claudia 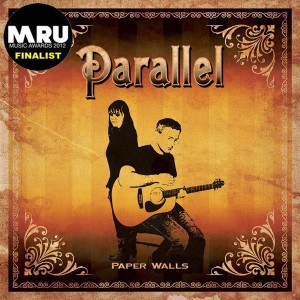 Huge thank you to the band Parallel whose CD is now on sale here and all proceeds go to Cork DAWG.

”Parallel are a Cork Based band influended a wide range of artists from The Beatles, REM and Nick Drake to Lucinda Williams and Emmylou Harris. Band members Lar English (Guitarist) and Christine Brine (Vocalist) began writing together in late 2011 and have since written and produced their debut album ‘Paper Walls’, an eclectic soulful mix of roots-y acoustic songs, with flavours of country, folk and blues. Following the success of ‘Paper Walls’, they recently followed this with the single ‘When I’m High’, an exciting power pop piece accompanied by the delightfully contrasting ‘Desolation’. Band members Steve Buckley (Drummer) and Willie Magnier (Bassist) provide a rich rhythm section for the bands fastly growing repetoir.
Parallel, hailing from regions of Cork and Limerick are currently residing in Cork City and suburbs where they are writing and recording their second album due for release soon. Follow them on Facebook or visit to listen to some clips of songs on  www.parallel-band.com.”

If you would like to buy a cd and in turn help Cork DAWG you can donate via our donate button here or on the top of our facebook page and please send a separate email with your address to where the CD is to be sent. Thank you.