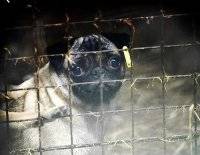 The implementation of the Dog Breeding Establishment Bill is long overdue, our country has the shameful reputation of being the Puppy farm capital of Europe and the thousands of dogs and puppies that live in appalling conditions are testament to this fact. These establishments need to be regulated and the legalisation should be effective to ensure there are closed down when they do not meet the standards needed to provide due care for the animals in their care.

I appeal to you to show some compassion and decency and immediately sign this bill into law.

For far too many years animal lovers throughout this country have petitioned the government to introduce strong and effective legalisation to regulate the puppy farm business and put and end to the intolerable suffering, neglect and abuse endured by thousands of dogs incarcerated in these hell holes throughout Ireland.

We have the well deserved and shameful reputation of being the Puppy Farm Capital of Europe, it is commonly acknowledged that we in Ireland lag seriously behind our European neighbours in all areas of animal welfare. For the sake of the animals that continue to suffer while your government procrastinates on this much needed legalsation will you please do the right thing and put an end to this shameful industry.

The reality for Star and all abused dogs like her is their owners who are responsible for allowing their dogs to suffer such pain will not be brought to justice. Why? Our animal welfare laws are totally outdated some drafted over 100 years ago. For decades animalwelfare organisations and individuals have petitioned the government to introduce effective legalisation which would like most civilised countries make people accountable for abusing animals and punish them accordingly. We in Ireland are in the backwaters when it comes to animal welfare, the indifference of the political parties to animal suffering is shameful.

If you want to help change this please write a short email to simon.coveney@oir.ie and ask him to introduce this long awaited legalisation. Star and the thousands of other who have no voice depend on you to speak on their behalf.