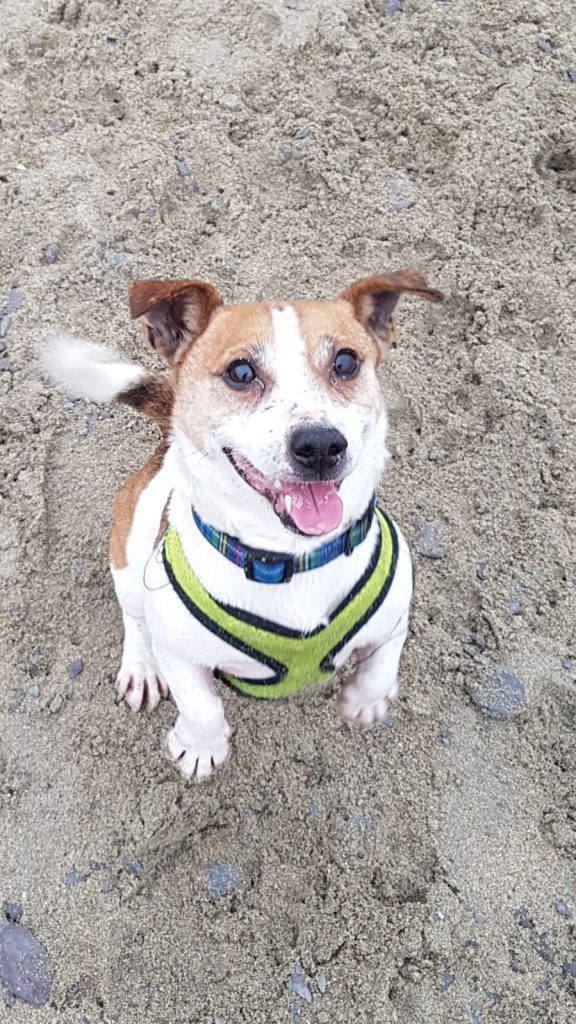 Name: Milo/ Miles. Age: 5 years old Breed: Jack Russell, Male and Neutered
Background: Milo lived an outside life, not socialised at young age. Milo finds it difficult initially to interact with other dogs as he does not know how to play. He sometimes  sees other dogs as a threat and nips them but once he gets to know them he is fine. Its all about more socialisation.
Since November, Milo has been living indoors, been socialised with other dog, has received house training and training on general manners.  Milo can be a bit grumbly at time but means no harm.

Since Milo has been living indoors, he is so happy in the warmth and loves his bed under the stairs.  Milo shows fear of being left outside as he runs straight back into bed after going outside to toilet.
Milo is happy to sleep a lot during the day, he loves his comfort and snores occasionally especially when snuggled up to you. Milo likes to feel of a body next to him but does not require to be rubbed all the time.  He likes his belly to be rubbed at times.  Milo has been receiving training on keeping him in a calm state  when walking. He walks best when he walks next to a person in a light harness. If he is calm, he reacts better when he  meets a strange dog. Over the past few weeks, he has been walked 3/4 week in no set pattern. This allows him to be more relaxed in house as the walk is a positive surprise for him. He is has been working on recall, treat and praise when walking. Milo has been fed twice a day in a pack and this has been working well
Milo appears as a tough nugget but is a very loving softie underneath who enjoys praise and attention. Milo is very loving and playful.  Milo loves sleeping next to someone. If allowed on bed, he will sleep next to you on the pillow snoring. Milo loves cuddles too. I’m  It is recommend not to allow him on chairs in living room. A bed next to the fire has proven to work better. Milo is not used to children or meeting strangers as he was in the garden of an adult only house.

To find out more about Milo the Jack Russell: