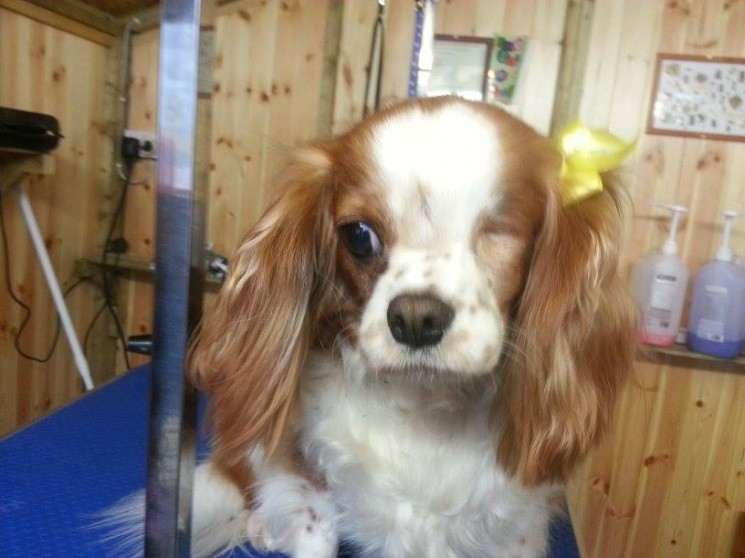 Goodbye sweet little Bijoux. You will be sorely missed by Jane, Mick and family. Thank you all who sponsored Bijoux.

Bijoux pictured here is a little female cavalier who came to us initially in 2011.  Her first few years of life were spent on a puppy farm, and then she spent the next twelve months in somebody’s back garden with a box for shelter.  She was extremely detached and would not interact in anyway with any human form of contact.  She was afraid of every single thing but instead of cowering she had simply shut down. We wondered if she would ever be able to behave like a normal dog, or have any quality of life. Two years on baby Bijoux has become a very happy little sweetheart, and she is continuing to make progress slowly but surely, with the help of the other dogs in the foster home.

She adores her walks, and despite her tiny delicate Cavalier features, she has managed to just love the rough terrain , and scamps around the fields like a little bunny rabbit, loves a swim in the summer, she leaves her foster mum for up to a minute at a time but always runs straight back for reassurance. She sleeps on the bed every night with two of her foster brothers and loves her sister a lurcher.  Bijoux would have done anything to avoid any form of attention previously now she just wants to be showered with kisses all the time – and she deserves it. What a brave girl she is!

I’m Bijoux’s foster mum and I want to say thank you so much to DAWG for giving her a chance, giving her the opportunity to live a fulfilling life and being so patient with her. No matter what Bijoux has ever needed medically DAWG have pulled the stops out to get it for her. Thank you DAWG!